On July 19th, 2013, a severe storm downed a 170-year-old silver maple tree in front of 62 Laing Street in Toronto. This tree is said to have inspired the song The Maple Leaf Forever, written by Alexander Muir in 1867.

At one time, The Maple Leaf Forever was Canada’s unofficial national anthem. Today it is still the regimental march of the Queen’s Own Rifles of Canada and the Royal Westminster Regiment.

Given the historic significance of the tree, many groups and individuals approached the city with proposals for using the wood. The Ontario Wood Carvers Association was among these, and eventually was given a section of the tree’s main trunk about seven feet long.

Working around creative challenges including holes, insect damage and wood that in parts is less than one-inch thick, project artistic director Neil Cox developed a design that features 35 maple leaves, each containing a relief carving of an important person, place or event in Toronto’s history. Historians from Archeological Services Inc. and Heritage Toronto chose the subjects. 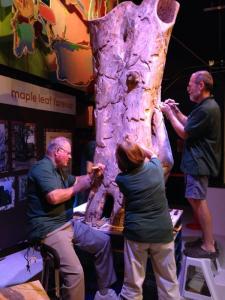 The trunk was debarked, cleaned up, then moved to space inside the Ontario Science Centre. Carving officially began on Canada Day, July 1st, 2014 and will take about a year (roughly 4,000 carver hours) to complete. Visitors to the Science Centre can see the work in progress, and come back to see the finished sculpture when it goes on permanent display in 2015.