Starting at the beginning… 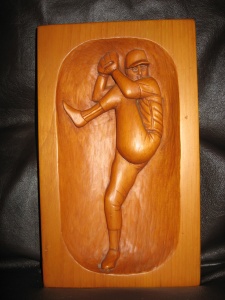 Here’s a picture of the first carving I ever made, somewhere around the year 2000. I had taken an evening course in woodcarving as a creative outlet and an opportunity to enjoy some “me” time away from two young sons.

The pitcher became a gift for my older son. Six years later I added a carving of the batter, and last year – after much nagging from said son – I got around to the catcher and umpire. 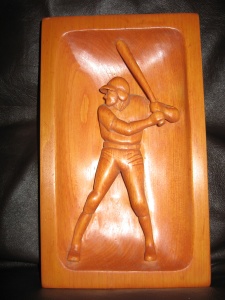 Now, of course, he wants the infield, outfield and audience, all involved in a dramatic bottom-of-the-ninth scene, but he’s just going to have to learn and carve those himself.

Looking back, along with launching that series of baseball carvings, those first evening classes launched my passion for woodcarving. One class led to another; knives started to come along; the starter set of gouges were replaced by higher quality tools, and chunks of tree began finding their way to my workshop, yard and shed.

In 2011, I finally summoned the nerve to enter my first competition, the Ontario Wood Carvers Association “Magic in Wood” show. I was so thrilled to win a first-place ribbon that I joined the association on the spot and became editor of its magazine, Ontario Woodcarver. Today I’m still editor of the magazine, and serve as vice president of the association.

Over the past few years, I’ve begun to experiment with power tools and, more recently, expanded into chainsaw carving. Chainsaw is an exciting experience: it amps up the speed (and volume), and combines creative work with something more akin to performance art.

While hand tool carvings will always figure among my creations, the future will also see much more in the way of chainsaw art. I look forward to posting images here over time, and hope you enjoy what you see.