Last weekend I visited Rolly Sauvé in North Bay. Rolly has been carving for 30 years and his specialty is wildfowl. That’s not an area I know much about, but you can’t not be impressed by Rolly’s work. He divides each carving into three stages – sculpting, texturing/detailing and sealing/painting – and devotes meticulous attention to all three.

Judges and collectors would agree. Rolly has several collectors, including one in New Brunswick who bought a carving a year for several years. Buffalo Sabres coach Ted Nolan is a fan. And one of Rolly’s blue jays is on display in the general manager’s office of the Toronto Blue Jays. 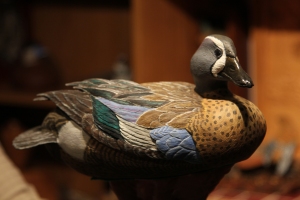 Members of the Ontario Wood Carvers Association (OWCA) will see an in-depth profile of Rolly and his work in their fall issue of Ontario Woodcarver magazine. He’ll also be entering artwork in the Kawartha Carving Competition on September 14 and OWCA’s Magic in Wood show, October 18-19.